Its been in the pipeline for awhile now but at last Valve have enabled in-home streaming on Steam, a feature which allows users with multiple PCs, laptops or tablets sharing the same network to stream games between one another. The idea works like this; starting at your most powerful system, you connect either wired or wirelessly to a weaker system, both systems log into the same Steam account and then voila, your old PC, laptop or tablet is playing Skyrim in whatever settings your most powerful system could muster as if the pair were built for each other.
The potential for such a feature, I’m sure you’ll agree, is huge. PCs connected to living room TVs, ancient desktops and laptops, SteamOS and Linux powered systems and even itty bitty tablets will suddenly be able to play games they could otherwise never could have and that is damn exciting, but let’s not get too carried away just yet. Right now Steam Streaming is still in its infancy so there will be the odd hiccup here and there, no other tasks can be performed on any system while streaming is taking place and currently only Windows, Mac OS X, Linux and SteamOS powered machines are supported. Beyond that little lot though Steam Streaming looks great. 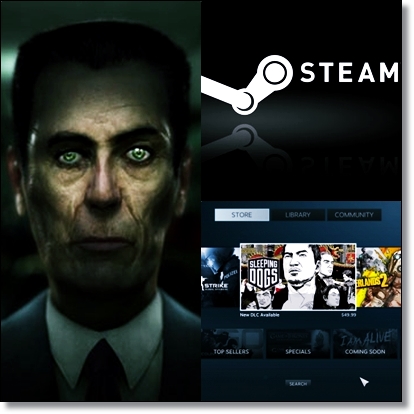